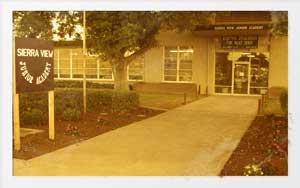 Sierra View Junior Academy is a coeducational school serving students in Kindergarten through the tenth grade. It’s located on a fourteen acre site, midway between Exeter and Lindsay. Sponsored by the Seventh-day Adventist churches in the area, it’s an integral part of the largest protestant parochial school system in the world.

There are currently approximately 150 similar schools located in the state of California.

Sierra View Junior Academy has operated in its current location since 1953. Prior to that, it existed on several different sites located at various times in Tulare, Lindsay, Porterville—along with a union school near the Northwest corner of Mineral King Avenue and Lovers Lane in Visalia.

Sierra View Junior Academy is a WASC accredited school through our affiliation with Armona Union Academy in Armona, California. The school is evaluated annually by the  Central California Conference Office of Education and the Pacific Union Conference of Seventh-day Adventists.